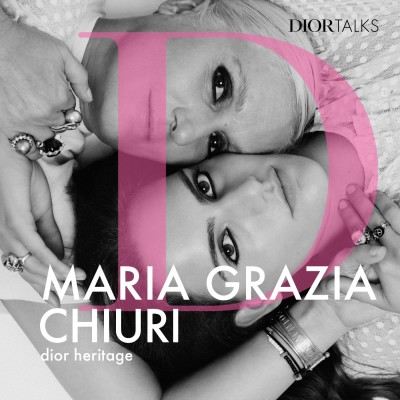 This latest episode in the ‘Dior Talks’ podcast series broaches the topic of heritage. In it biographer and journalist Justine Picardie speaks with Maria Grazia Chiuri, Creative Director of Dior women’s collections, about the parallels between Monsieur Dior’s burst of creativity brought on by his emergence from the trauma and privations of war and the moment in history through which the world is currently living.

The importance of the founding couturier’s relationship with his younger sister Catherine - coincidentally the subject of Picardie’s new book ‘Miss Dior: A Story of Courage and Couture’ - is explored as more than simply a familial relationship. Instead, the pair discuss how so many aspects of Monsieur Dior’s creativity and the long-established House codes that resulted can trace their source to this sibling bond.

The fortune-telling and tarot cards that would shape so many of Monsieur Dior’s decisions - and inspire the House’s various creative directors, right up to Maria Grazia Chiuri today - grew from an initial fascination with the divinatory arts to a key source of comfort and hope when Catherine was imprisoned during WWII and all contact with her vanished. After she was freed and found, these emotions would be translated into the New Look, a sartorial reflection of optimism that produced extraordinarily architectural clothes that balanced an idea of protection with one that celebrated feminine and floral beauty. A keen gardener, Catherine would go on to cultivate flowers in the south of France, near her brother’s summer estate, that would provide ingredients for several of the House’s famous fragrances.

This fascinating exchange, delving into the overlapping and layering of occurrences and inspirations, pulls back the curtain to plumb the hidden and unnoticed depths of the Dior heritage story.